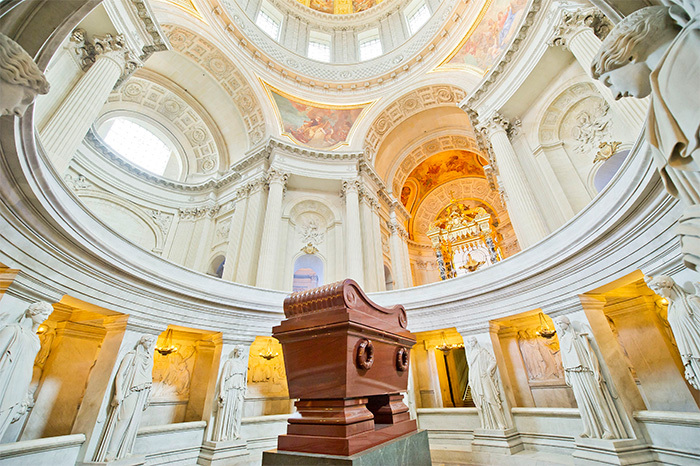 It is also a hospital and a retirement home for war veterans, which was the building’s original purpose, as well as the burial site for some of France’s war heroes.

King Louis XIV initiated the project by an order dated November 24, 1670, as a home and hospital for aged and unwell soldiers. The name is a shortened form of Hôpital des Invalides, the Hospital for Invalids.

The architect selected by the king from the eight projects submitted for Hôtel Les Invalides was Libéral Bruant.

The site for the Hôtel was suburban in the 17th century. The foundation stone was laid on November 30, 1671. The building of the Hôtle took three years and the first disabled soldier was oused there in October, 1674.

By the time the enlarged project was completed in 1676, the river front measured 196 meters and the complex had fifteen courtyards, the largest being the Cour d’Honneur, Court of Honor, for military parades.

The Cour d’Honneur continues to be used as a setting for military parades as well as ceremonies for awards and decorations and for concerts.

The courtyard is 102 meters long and 64 meters wide. It is lined with two rows of arcades.

A large statue of Napoleon I, created by Seurre in 1833, stands on the upper floor in a large arcade, looking across the courtyard.

This statue was originally standing on top of the Colonne Vendôme. It was brought here to Les Invalides in 1863.

The courtyard has three wall sundials. One on the north facade, one on the east facade and the third is on the west facade.

The upper floors of the structure enclosing the courtyard is now a memorial to those who have fallen and served in France’s wars since before World War I.

Plaques line the walls honoring such as, “Les Forces Feminines Français”, “des Formations Sanitaires”, those who carried off the field the wounded and dead, “For the Foreigners Fought in France, for France” such as natives of Poland, Holland, and the United States. The Resistance of the Swiss Volunteers are honored, as is the Red Cross, its nurses and ambulance drivers.

Even the families of the dead are remembered. Roughly translated this plaque reads, “To Their Fathers, Dead for France, The Sons of Those Killed, The Parents of Those Killed”.

The lower floor of these buildings have on display cannons and transport vehicles from times gone by.

It was felt that the veterans required a chapel, in which twenty year old Jules Hardouin Mansart assisted the aged Bruant, and then finished it in 1679 to Bruant’s designs after the elder architect’s death.

It was called the Church of St. Louis and daily attendance of the veterans was required.

King Louis XIV wished to have a chapel where he and the soldiers could attend the same Mass. But, of course, the soldiers could notuse the same entrance as the King. This problem was solved by constructing a dual complex building, the Church of St. Louis, or the Soldier’s Church and the Eglise du Dôme, the Royal Church, often referred to as the Dôme des Invalides from its most striking feature.

Inspired by St. Peter’s Basilica in Rome the original for all Baroque domes, it is one of the triumphs of French Baroque architecture.

Mansart created an attic storey over its main cornice, and employed the paired columns motif in his more complicated rhythmic theme of a double set.

The general program of the church is sculptural but tightly integrated, rich but balanced, consistently carried through. He caps the vertical thrust firmly with a ribbed a half globe dome. The domed chapel is centrally placed and dominates the court of honor. It was finished in 1706.

The interior of the dome was painted by Le Brun’s understudy Charles de La Fosse (1636-1716) He used a Baroque element that creates the illusion of space seen from below. The painting was completed in 1705.

The most notable tomb at Les Invalides is that of Napoleon Bonaparte (1769-1821) in the crypt under Mansart’s dome.

Napoleon was initially interred on Saint Helena, but King Louis Philippe arranged for his remains to be brought to St. Jerome’s Chapel in Paris in 1840.

A renovation of Les Invalides took many years, but on April 2, 1861, Napoleon was moved to the most prominent location under the dome at Les Invalides.

Les Invalides is also the burial site for some of Napoleon’s family, for several military officers who served under him, and other French military heroes such as:

Henri de la Tour d’Auvergne (1611- 1675), better known as the Viscount de Turenne, he was Marshal of France under King Louis XIV and is one of France’s greatest military leaders.

On the north front of Les Invalides, Hardouin-Mansart’s chapel dome is large enough to dominate the long facade yet harmonizes with Libéral Bruant’s door framed under an arch (see photo at top of page).

Through the arch at the north end of the Cour d’Honneur is the expansive Esplanande des Invalides. This is a wide and long open lawn area.

At the north end of the Esplanade is the the Pont Alexander III. Across this fabulously ornate bridge are the Petit Palais and the Grand Palais.