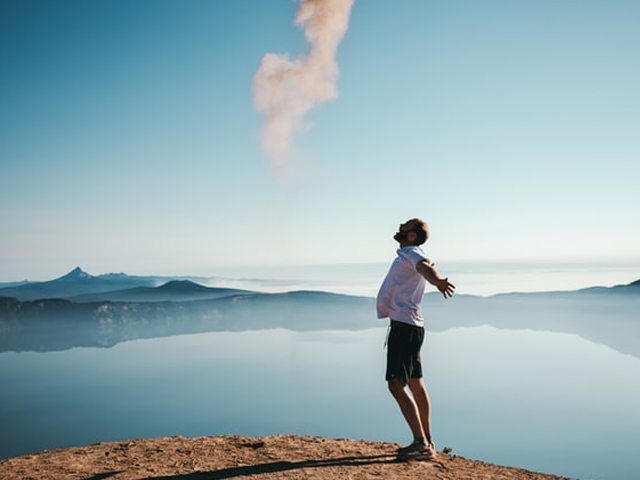 I’ve noticed before how my intentions with my own dreams often strike back in clever ways.

For instance, when I was readily working with Calea Zacatechichi, it’s powers alluded me, even mocked me. I would have dreams about taking dream herbs instead of having lucid dreams or crazy vivid dreams! Ha! Oh Calea Z…

Anyhow – I wanted to share a dream today that’s about having a hole in my palm.

This comes from the fact that one of my favorite means of reality testing, and by extension, testing the reality (or lack thereof) in the dream world, is putting my hands through things and putting a finger from my left hand into my right palm, or vice versa. (As I type this out it sounds a lot creepier than it is when I actually do it in a dream, which is that context is like striking gold.)

This is a great method for reality testing because you can do this no matter where you are, in any context, in both the dream world and in waking life.

I had a dream that tied into this method for reality testing, which is both clever and maddening at once. It hints at some kind of intelligence operating within our dreaming minds, unconscious or irrelevant to our intentions.

Here’s what I wrote down in my dream journal:

I’ve got this hole in my left hand. It’s not huge, but it’s there, and it’s kinda freaking me out. I mean, maybe I should see a doctor about it! Couldn’t it get infected? I look it up online and find some dumbass who posted on Yahoo! Answers something about a hole in his hand, complete with an obviously doctored photo of his hand with a big hole in it.

I realize if I take a picture of my hand, it’s going to be hard to see the hole. The palm side of the hole is larger than the top of my hand, which is sort of black around the edges of the hole.

I realize one thing I can do is shine a laser through it! So I shine a laser through it, putting this large flashlight-like device over the top of my hand, cupping it, and then it comes out in a laser beam from my palm, down towards the bathroom counter. I’m showing N and someone else this, in my bathroom, and they think it’s a magic trick.

It’s not, and it actually seals up the hole mostly, causing it to burn like hell and bleed a bit too.

I added the following commentary about this dream that morning:

It’s almost like inside of all our heads, there’s a little shaman dream prankster, ready to push back when we overly get attached to setting a certain intention with a dream – whether it be a dream sign or getting to excited about the idea of using a dream herb to have vivid dreams or lucid dreams.

Why do you think it is that it works like this? What’s going on here when our dreams mock our intentions to work with them?

Lots of people have their personal nightmare; you know, the one that re-occurs overs the years, the one that horrifies them to the core, even if sometimes it doesn’t seem very scary when talking about it.

Mine is something most people are familiar with: the 1970′s horror film, The Exorcist.

When I was 10 years old I saw The Exorcist. It was on TV and I watched it with my brothers. Not wanting to look weak in front of them, I acted brave; oh no, this movie doesn’t scare me!

The truth is, it scared the living shit out my 10 year old self. I vividly remember being scared of possession, so much that I  purposely slept in a crooked position because of those scenes in The Exorcist where they showed her body floating in the air, possessed, straight as a nail. I thought if I slept straight I would be more susceptible to demon possession.

This fear slowly dissipated in its intensity over the years; but instead of becoming something I ignorantly feared, it just turned into a fear deep in my head, somewhere. The only place it had to come out was my dreams. You know, that wonderful place where logic doesn’t apply so well like it does it the real world to contain our fears.

That little girl from The Exorcist has now appeared in my dreams for years, making many a guest appearance. The dreams are some of scariest I’ve ever had. It did not help that last year I read the book – which, mind you, I thought was a brilliantly written piece of fiction, and by far the most elegantly disturbing horror novel I’ve ever read – but reading this book absolutely planted her little seed in my head again and she made quite a few appearances in that time frame.

I thought it’d be interesting to share one of those dreams. This dream is special in that it also includes someone whom I have much admiration for, a friend named Juan who wrote about his experiences in Peru under a shaman and allowed me to share it on Dreaming Life for which I’m very thankful. His appearance in this dream is very intriguing to me. (You can read more about his experiences here.)

Here’s what I wrote in my dream journal in February 2009 about a dream with Juan and the demon from The Exorcist. In ths dream, she is in the next room chained to a bed when I get something from Juan in the mail and then have to into her room for some reason.

I’ve received a package in the mail from Juan. It contains various shamanic plants, including ayahausca. His letter says we must have the girl come stay with him immediately or she will die. He will perform a shamanic ritual in order to save her. But the thing is, I know she is already dead.

I do not make eye contact, but I can feel her eyes on me. I am pulled into returning her stare.

She’s lying on the bed. Her face is pale, with blue and white rings. She is terrifying to witness.

There is an electrifying, intelligent look in her face beyond the years of a young girl.

I wake up in fear.

I added after this some commentary:

The energy of the little girl – the demo – was so sharp, so focused – her eyes were on my like a wild animal stalking its prey. And the color of her skin, a pale blue and white blended together, similar to the color contrasts I’ve been using in my art. A visually and emotionally captivating dream experience. I finished reading the Exorcist book about 2 weeks ago – fascinating how the fear lurks in my mind and comes out so much later in this dream.

Isn’t it amazing how something we saw that scared as children can haunt is our dreams as adults?

Much in the same way of what I wrote about recently in that there’s a goddess archetype that developed in my dreams over the years, this demonic little girl from the Exorcist has become a kind of reoccurring nightmare concept that has appeared in my dreams on and off for more than a decade.

It gives me the creeps just writing about it and thinking about her.